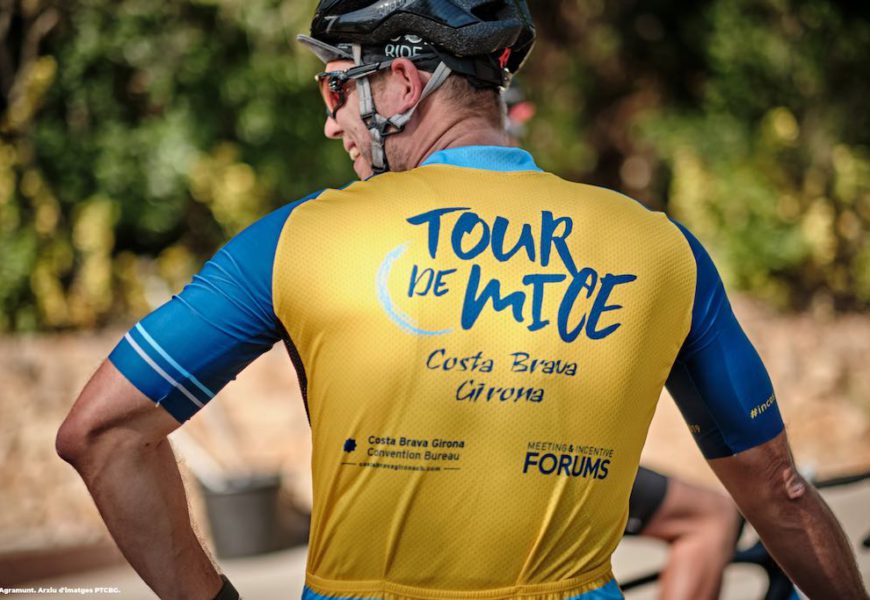 The Costa Brava was the setting for the M&I Experience Tour de MICE, attended by some hundred European business tourism professionals, mostly based in the United Kingdom, Germany and Benelux. They included senior executives from events agencies and high-level professional planners and destination representatives, incoming travel agencies, hotels and venues catering for big events in the province of Girona.

During the four-day event, participants pedalled from Lloret de Mar to Girona, via Platja d’Aro and Caldes de Malavella, by means of different cycling routes selected to cater for the degree of difficulty and the distance to cover for each of the three levels into which the groups were organised.

Each day combined targeted meetings in the morning with stages of the cycling routes, dinners and social events at the different venues and hotels along the way.

Lloret de Mar kicked off with an opening dinner at the Sant Pere del Bosc architectural complex after an easy warm-up route to get the wheels spinning. The group stayed at the Gran Hotel Monterrey, which also hosted the next day’s workshop and lunch at its Nàutic restaurant.

Setting out from Lloret, the first leg of the Tour took participants to Platja d’Aro for dinner at La Taverna del Mar of Hostal de La Gavina and continued the following day with meetings at the Park Hotel San Jorge.

The third leg of the Tour de MICE 2019 ended in Caldes de Malavella. The Hotel Camiral at PGA Catalunya Resort, the last hotel on the programme, hosted the closing dinner and the Tour prize-giving. The ceremony was attended by the Girona-based Scottish professional cyclist, David Millar, with an impressive list of achievements to his name in the top European cycling races.

The next day attendees completed the last leg of the Tour, pedalling from Hotel Camiral at PGA Catalunya Resort to Girona. Once in the city they were given a guided visit before having lunch in Meat Garden restaurant’s Jardins Clàssics.

Girona’s cycling tradition goes back a long way and the province has all the possible services and infrastructures that any cyclist could wish for. It is the training camp headquarters for professional cycling teams like Mitchelton-Scott (Australia) and EF Education First-Drapac (USA) and it is the permanent place of residence and training for elite cyclists such as David Millar himself, Robert Gesink of Team Lotto NL-Jumbo and Rory Sutherland of UAE Team Emirates to name just a few.

In 2017, Sea Otter selected Girona as the location for its event in Europe. The first two editions had a highly satisfactory economic outcome and level of participation as far as the organisers, companies and collaborating institutions were concerned. The 2020 edition of this global cycling event will be held once again in Girona.

When Worldwide Events decided to propose the Costa Brava Girona Convention Bureau’s candidacy to host the Tour de MICE 2019 in the province, it positively evaluated the quality and amount of accommodation and services available and the positioning of cycling, with hundreds of kilometres of routes that are ideal for cyclists.