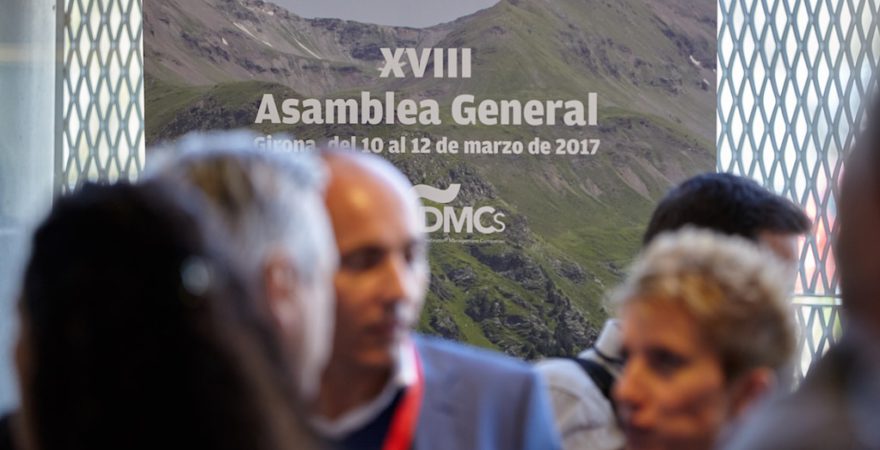 The start of three unforgettable days

Most of the group began to arrive at the Melià Girona Hotel, where they were staying, on Friday afternoon. Awaiting them there was a lunch cocktail set out on several stands representing different places in the Girona Counties and their associated cuisine.

The Monastery of Sant Pere de Galligants provided a unique setting for the welcome event held in the evening, with a dinner cocktail and a performance by the casteller human tower group Marrecs de Salt, set against the stunning architectural backdrop of this heritage site.

The meeting’s panel discussions were held on Saturday in the auditorium of the Girona Conference Centre, located just ten minutes away from the hotel where most of Spain DMCs’ delegates were staying.

The debates, which focused on promoting the country’s MICE destinations, the role of the high-speed train link and the importance of security in business tourism areas, were led by speakers from the convention bureaux in Madrid, Barcelona, Costa Brava Girona and Girona City, as well as representatives from national rail operator RENFE, the national police force and Catalonia’s Mossos d’Esquadra.

The discussion part of the meeting closed with a working lunch followed by a networking session. Twenty-five member companies from the Costa Brava Girona Convention Bureau took an active part in this section of the event, with very warm relationships established between executives from the DMCs and representatives of the Girona Counties’ business tourism companies.

While the discussions were taking place on Saturday morning, those accompanying the delegates enjoyed a visit to La Garrotxa county, where they were shown around the Croscat volcano and the medieval towns of Besalú, Castellfollit de la Roca and Santa Pau.

In the afternoon the groups reunited to discover the city guided by Gironabooking on a Game of Thrones-inspired activity. Dressed as mediaeval characters, the participants explored Girona’s historic quarter and tasted a typical local speciality known as xuxos.

Mas Marroch, El Celler de Can Roca’s event venue, was the setting for the gala dinner, during which renowned chef Joan Roca said a few words to those attending.

The final part of the programme consisted of incentive activities for companies. The participants were divided into two groups. The first group went off to discover the Costa Brava coastal paths, guided by the company Aventura Girona, while the second group enjoyed a DO Empordà wine-tasting visit to Finca Bell Lloc winery, which was designed by architects who recently won the Pritzker Prize, the Oscars of architecture. After the activities, the participants visited the Fishing Museum, finishing off with a seafaring cuisine workshop at the Espai del Peix, Palamós’ gastronomic centre.

“You have set the bar very high for the following destinations that want to organise our next meeting. Without doubt, it will be difficult to beat.

The organisation of this event involved the full support of the Costa Brava Girona Convention Bureau and the Girona City Convention Bureau in locating the perfect venues and activities to make up a programme that was very well received by the more than 60 participants from the destination management companies (DMCs) and their companions.

Many of the delegates, who had come from all over Spain, did not know about the destination’s MICE services. Most of them mentioned how valuable these facilities would be when offering their business tourism clients alternatives to the large European cities, highlighting the landscape, gastronomy, proximity and professionalism in all the venues and services.